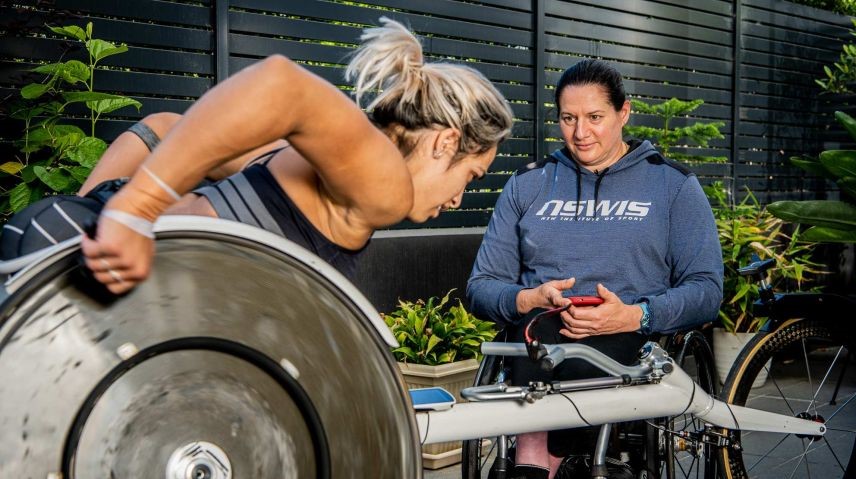 'There is so much trust between us. That relationship is probably the strongest I have in my life. She pushes me to be the best version of myself. She definitely sees my potential before I see it, and Louise knew I could do this before I believed it.'
‍
- Australia’s triumphant Paralympic Gold Medallist Madison De Rozario on her relationship with coach Louise Sauvage.

THEY are two of Australia’s all-time greatest athletes, and today the Minerva Network is delighted to announce the appointment of Louise Sauvage and Priya Cooper as Minerva Legends who will inspire a new generation of outstanding Paralympians.

Minerva Network Co-Founder and Chairman Christine McLoughlin AM said Louise and Priya were highly respected Australians who had excelled as elite sportswomen and then as leaders in the community.

“As we enjoy the feats of our current Paralympians, it is my absolute pleasure to confirm that two of Australia’s best known Australian Paralympic Champions Louise Sauvage OAM and Priya Cooper OAM have agreed to join our movement as Minerva Legends,” Ms McLoughlin said.

“Louise and Priya are quintessential role models for our Minerva Athletes, having transitioned from the highest levels of sporting success to professional success, and they continue to inspire us all with their actions and their words.

Minerva Legends are former elite athletes who have transitioned to highly successful careers post sport. They become role models for the Minerva Athletes and share their experiences and advice through Minerva workshops and events.

Both nine-time Paralympic gold medallists and former world champions, and also recipients of the Order of Australia for their services to sport, Louise and Priya are currently involved as Australia competes at the Tokyo 2020 Paralympics.

Louise is the coach who has taken wheelchair racing sensation Madison de Rozario to gold and bronze medals in Tokyo.

Priya has been a Seven Network commentator on swimming during these Paralympics.

In a highly decorated sporting career as a wheelchair racer, Louise won nine gold medals and four silver medals from four Paralympic Games, and three gold medals from the 800m demonstration event at three Olympic Games. She represented Australia at the 1993, 1995, 1997, 2001 and 2003 IAAF World Athletic Championships, winning gold in the 800m Wheelchair demonstration event each time.

The 2000 Sydney Olympic and Paralympic Games were a career highlight for Louise who carried the Olympic Torch across the Sydney Harbour Bridge and lit the cauldron to mark the commencement of the Paralympic Games.

In the 800m demonstration race at the 2000 Olympics, Louise won gold before a home crowd of 110,000. She went on to win two gold medals and one silver medal at the Paralympics.

The undisputed No.1 female road and track racer in the world at her peak, Louise also won some of the world’s most prestigious road races including the Boston, Los Angeles, Berlin and Honolulu Marathons.

An influencer in the world of sport, she is a Board Director of VenuesWest, Ability WA, Disability Services Commision and President of WA Disabled Sports Assoc.

A talented broadcaster, Priya has regularly commentated on major events and has been engaged as a reporter on lifestyle and entertainment programs such as Sydney Weekender, Great Outdoors and Big Arvo.

Priya has a degree in Health Promotion and Journalism from Curtin University of WA, and is very involved in public speaking. She has addressed major corporate and government conferences and events around the world. Her widely recognised presentation titled Success Is A Choice reminds us that any dream, large or small, personal or corporate, can come true with the strength of sheer determination.

On the back of a highly successful series of webinars conducted for quarantined Australian Olympians returning from Tokyo, the Minerva Network will run three webinars for returning Paralympians, featuring Ann Sherry AO, Liesl Tesch AM MP, Sarah Kelly AM, Linda Bracken and Monique Murphy.

These webinars will help our returning Paralympians by covering important topics such as Entrepreneurial Mindset, Presenting with Authenticity, and Starting or Growing a Speaking Career.