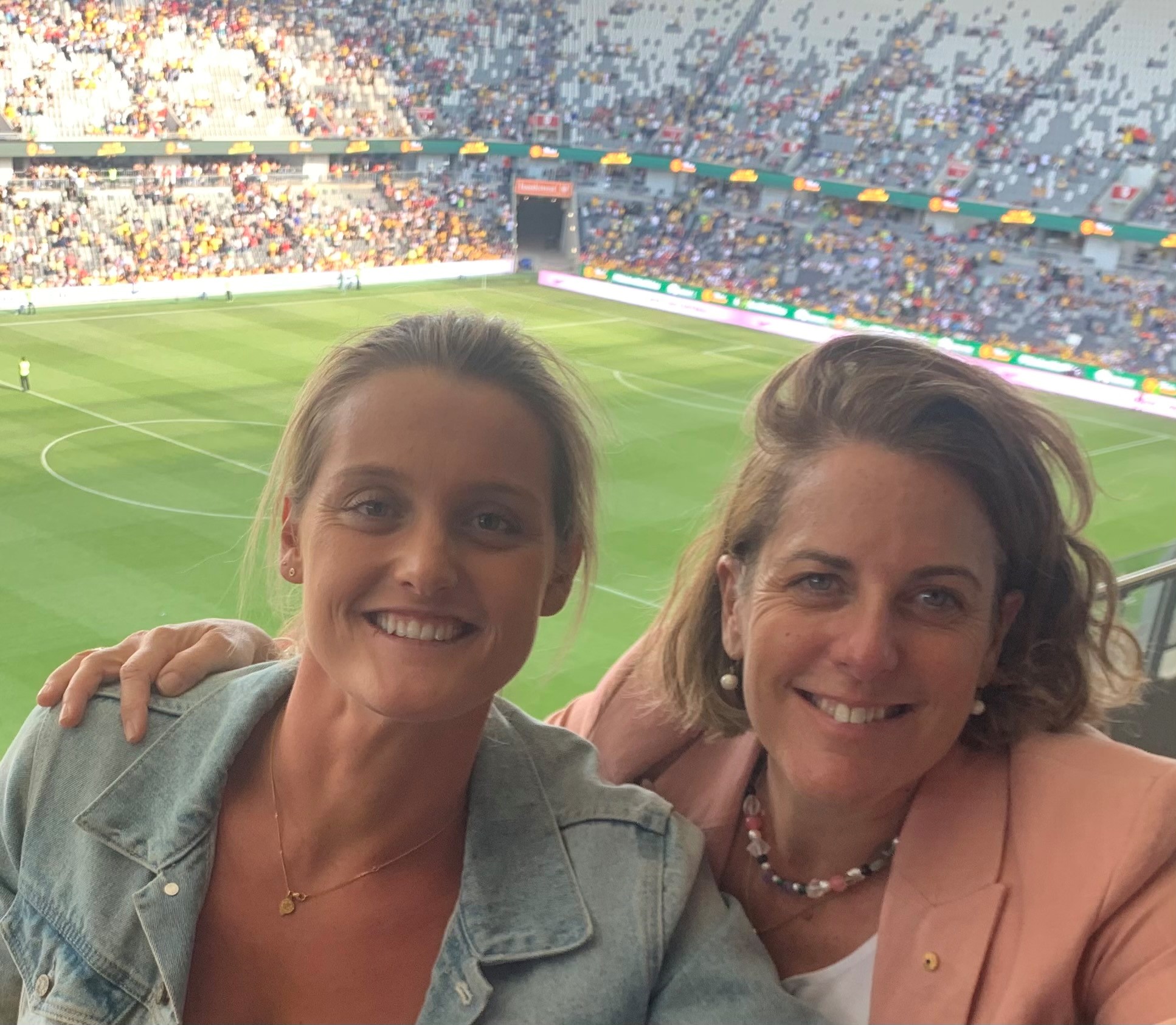 HOW A CHANCE OPPORTUNITY CHANGED EVERYTHING FOR DEBUT OLYMPIAN

Copied with permission from: https://www.northernbeachesreview.com.au/story/7325585/how-a-chance-opportunity-changed-everything-for-debut-olympian/

DAYS out from her Olympics debut in Tokyo and Narrabeen's Georgie Rowe is focusing on a few things - each individual stroke and harnessing those butterflies.

She's always been sporty - surf boats, football, netball and touch football, to name a few - and she's long had a goal of getting to the Olympics, but up until 2017 her sport was kayaking.

As a child she remembers wanting to be just like her aunt, two-time Olympian Shelley Oates-Wilding.

"She definitely inspired me a lot to pursue the Olympic dream and then after school I just fell a little bit more in love with the surf club. I was doing a little bit more of that, the people were really different and I just fell out of love with kayaking. It wasn't that I didn't want to keep trying to go to the Olympics, but life gets in the way, family, moving out of home, studying, working and then I started rowing surf boats."

But in 2016 a friend tagged her in a Rowing Australia Facebook post to take part in the National Indoor Rowing Championship and she thought was it was a good excuse to have a day off work.

At that point she'd never done any indoor competitions, but on the day she did everything changed.

"It was all just a joke and my friend said 'you should do it' then I was actually like 'f**k yeah, maybe I will'," she said. "It was indoor rowing on the ergo, I didn't really think much of it, I just went and did it. I had no strategy or anything, I was just get on, get off as quick as you can, go as fast as I can. I took a couple of mates with me."

But Rowe's times were exceptional; faster than any woman on the national team. Within a week she was receiving calls from Rowing Australia hoping to lure her away from kayaking and into rowing.

Back then she was working as a registered nurse at Anzac Village Narrabeen and knew just how hard rowing would be. "I was living a pretty good social life and just having a bit of fun here and there," she said. "I knew it was going to be a lot of hard work - they say that rowing and nordic skiing are the two hardest sports in the world - so I knew it was going to be really hard."

She decided to switch in 2017 and training was every bit as hard as she imagined.

"It's cold on the water, you have awful calluses on your hands and you have constant butt pimples because you're wearing lycra more than you're wearing normal clothes," she said.

"There's a lot that you put yourself through that people wouldn't do, like doing a five kilometre erg to the point where you want to throw up. They call it a sacrifice, is it a sacrifice or a choice, I don't know? It's up to the individual. It's a choice for me, but you have little things that you miss out on all the time, the small sacrifices like seeing my niece and nephew grow up, missing weddings, engagement parties.

"I feel like I'm missing little milestones, but I'm doing something pretty cool for the trade off, I wouldn't give it up in a heartbeat. It's probably more just time you miss with people and it kind of breaks your heart if you think about it too much."

She learned the sport in the single-scull and trains in pairs and fours, but for competition it's the eights and she sits right in the middle.

"I think the intention for me was always in the middle of the eight," she said. "I'm an engine, I've got a big strong heart, big lungs, big legs and I think my personality as well. You need a lot of harmony within the boat and you need some pretty level-headed people with some life experience and I think that's what I take into the boat."

But she said the style of the 2000 metre race is difficult.

"We could have our slowest race ever at the Olympic Games. We're not going there expecting to get an amazing time because you just don't know what the conditions are going to be like. If there's a headwind it might take us 6.5 minutes."

As one of 36 athletes in Australia's Olympic rowing team, she left the northern beaches in late June for three weeks of training in Rockhampton where the weather is closer to Tokyo's climate. She arrives in Japan just five days before her event.

The Olympics starts on July 23. There are seven Women's Rowing Eight teams in the Games and their heat is on July 25, the repercharge (semi finals) is on July 28 and the final is July 30.

Watching the Games from home in Australia will be Georgie's grandmother, Betty Oates. When Georgie was a teen Mrs Oates (who is the mother of Shelley Oates-Wilding) drove her to Narrabeen Lake countless times for kayak training. Georgie lived with her grandmother from when she was 16 years old and counts her as a one of her biggest supporters.

Thanks to COVID delaying the Olympics, Rowe's better prepared physically, but mentally the wait has been challenging. Life in the athletes' village will also be very different during the Tokyo Games, with outings only allowed for competition.

As for those butterflies, Rowe's been told you just need to learn how to harness them.

It takes a village to raise an Olympian

Georgie Rowe is one of over 190 elite female athletes who are part of the Minerva Network that supports them on and off the field, or in this case boat.

Minerva was co-founded by fellow northern beaches local Romilly Madew, who is also the CEO of Infrastructure Australia and former CEO of Green Building Council of Australia for 13 years.

A keen sportswoman herself and active member of Bilgola Surf Club, Madew said that she and the other co-founders looked at the boys' club surrounding males in sport, where elite female athletes often receive less money, sponsorship and support.

Minerva's founders and mentors are a group of high-achieving business women, who give support, contacts and guidance to female athletes at the beginning, middle or end of their careers.

"We're all sports mad and we just had a vision to create a network for our female athletes based on mentoring," Madew said.

"When you look at our female athletes, nine times out of 10 they're working, caring or studying and playing full-time sport, they don't get paid the funding that our male athletes get. Their resilience and focus is remarkable in how they can train while they're doing all these other things. It takes a community to get these women through because they don't have the financial support that the men.

"I mentor a lot of women. I was mentored as I was coming through and it made a huge difference. Now it's my turn to throw the fishing net out to support others."

Rowe admits for a long time she didn't know what to do after rowing, until Rowing Australia put her in touch with Minerva and she was paired with Madew as her mentor.

"My interpretation of it is that it's getting female athletes, leaders in their sport, transitioning them in a business lifestyle or help them in their career progression," Rowe said.

I mentor a lot of women. I was mentored as I was coming through and it made a huge difference. Now it's my turn to throw the fishing net out to support others.

"I need help to get somewhere. In the business world I'm going to need my connections, I'm going to need people like Rom to help me get there. A lot of these other people they've got theses private school educations, they've got their network and their parents are doing that for them whereas I don't really have that and it's nothing against my parents, I was just brought up differently."

As well as training for the Olympics, Rowe is also completing a Master of Business Administration and Masters of Public Health at Torrens University, and thanks to her mentoring has a clearer idea of what else she'd like to do outside sport.

"I'd love to be able to run a hospital or something along those lines," she said. "I definitely want to be in a job where I can make a difference in people's lives."

These days the relationship between Rowe and Madew has changed and they are now part of each other's lives and family.

"Our relationship has completely switched from a mentor mentee relationship to more of a friendship," Rowe said.

For Madew, "when Georgie wins or when she got her scholarship I really couldn't be prouder, it's really just giving back".