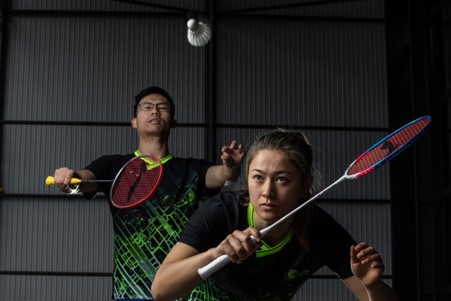 Gronya Somerville: Watch out for the Underdog

They may not be in Australia, however, as the 26-year-old Somerville is better known overseas than at home.

Despite this popularity – she also has 132,000 Facebook followers and 3440 YouTube subscribers – Somerville didn’t even feature on a recent advertising industry list of Olympian social media accounts that included Baynes and Tomljanovic.

Australia is a global minnow in badminton. Somerville and women’s doubles partner Setyana Mapasa qualified for Tokyo at 15th in the world, out of a pool of 16 countries. They go in less prepared than many of their rivals – having had fewer international tournaments over the past 18 months to test their mettle – and a medal is a long way off.

But like the sport she plays, Somerville is the face of a changing Australia.

A descendant of Chinese 20th-century revolutionary Kang You Wei, Somerville’s relative obscurity only drives her harder, according to one of her biggest fans, businesswoman and Coles and Charter Hall director Jacqueline Chow.

“There’s an element of the underdog in her,” says Chow, Somerville’s mentor through the sportswomen-focused Minerva Network.

“Through her ethnicity, her personal challenges, through a sport that doesn’t have as much profile as others, there’s something about that that she relishes.”

Somerville agrees with the idea, especially as her late start in badminton at the age of 12 – when most professional players pick up a racket at about 5 or 6 – meant years of catching up, first to children younger than her and then to senior rivals from stronger badminton countries.

Her Tokyo women’s doubles and mixed doubles – with partner Simon Leung – kick off on Saturday. Low seedings in a sport dominated by powerhouses Japan, China and South Korea actually make it easier to perform, she says.

“We don’t have any pressure or expectations,” she says. “But given the opponents and the level we know we can bring, we would love to progress out of the pool.”

Part of her drive is also deeply personal. The youngest of three children, Somerville was still a child when her father passed away. Her brother Julian suffered mental health and drug addiction problems and in 2018, while she was playing away at a tournament, he took his life.

“It was an unstable environment at home having to be a supporter for my mum and brother on and off,” she says, drawing a link between growing up and what she wants to make of her life.

“I’m very aspirational in what I want to do. I always want to aspire to be the highest level of what I can be in life – career, sport, trying to prepare the best I can for when I am done with sport.”

This includes helping to look after her mum.

“She created a good life for us. Now I have the opportunity, I’m trying to learn more about financial investments to set myself up for the future.”

Somerville’s frustrated that Australians don’t rate the game as highly as Asian and European audiences.

“There’s still a perception that badminton is a slow lollipop game in the backyard,” she says. “They haven’t seen the high level, the athleticism, the tactics.”

The sport battles for oxygen in a sports market that Badminton Australia chief executive Jamie Parsons says is the most saturated in the world.

“Trying to get badminton to get a foothold in that market is really difficult for a sport like ours,” he says.

Sport Australia figures show more people play badminton than table tennis or squash, but even with pre-pandemic 2019 figures showing nearly 200,000 people playing it each year, the numbers are tiny compared with the 3.2-million for a sport such as swimming.

The growth, however, is a consequence of Asian immigration and the game is a key part in integrating first-generation Australians, Parsons says.

“In communities as well, where sport is such an important part of Australian cultural identity, badminton provides an important pathway for people who migrate to Australia from Asian countries to share something that’s important to the fabric of Australia,” he says.

Somerville, who completed a bachelor in exercise science at Victoria University last year, wants to combine an ongoing commitment to badminton with a business career. The sport allows that, she says.

“Because badminton can have a decent length of career – provided you don’t get a major injury – some play to 35, to their late 30s,” she says.

“My goal is to set up some kind of online business or evergreen business which I can maintain while I travel. I don’t want to rely majorly on sponsors – you’re just so vulnerable to change in the economy and your level and all that kind of thing.”

Her mentor Chow says Somerville can achieve whatever she sets her mind at.

“From very volatile and challenged beginnings, she has become quite a resilient, focused human being who’s conquered all of that,” Chow says.