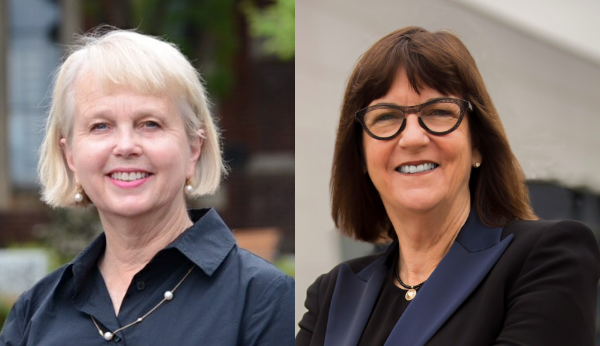 The Minerva Network is proud to announce the formation of a Chapter in Victoria as it continues to expand its national footprint.

The Victorian Chapter will be co-led by two distinguished powerhouses and the most senior women sporting leaders in the country, Kate Palmer AM and Peggy O’Neal AO.

A transformational leader, Kate Palmer has more than 20 years of experience in chief executive roles across various national and state sporting organisations. She is passionate about organisations delivering strategic outcomes for high performance, community participation, and building the capability of sport and international sporting success.

A trail blazer for addressing inequality on and off the field in Victoria and the advancement of women in leadership roles, Peggy O’Neal became the first female president of an Australian Football League Club (Richmond Football Club) in 2013, and in 2014 was named one of the Financial Review/Westpac 100 Women of Influence and one of the Women's Weekly 50 Most Powerful Women in Australia.

Christine McLoughlin, Chairman of the Minerva Network, says Peggy and Kate’s strong business and sporting acumen will help kick the new chapter off to a bright start.

“Victoria is a strong and large sporting state. Peggy and Kate’s combined leadership networks, along with their solid connection to sport and their great passion for women in sport, will certainly help establish a strong foundation for the Victorian chapter to thrive and for women athletes to have the best possible chance to excel off the field,” Ms McLoughlin said.

The Victorian Chapter is launching during a particularly challenging time for the state, which is experiencing the worst outbreak of community transmissions of COVID-19 in the country, isolation thousands of people.

"I am thrilled that the Minerva Network is coming to Victoria and delighted to be involved in helping establish the chapter,” Ms O’Neal said.

“In a time when we are separated from one another because of the pandemic, Victoria's women athletes will now be able to connect (even if only online at first) to take advantage of the business connections that the Network fosters across Australia, and the professional and personal development opportunities which are Minerva's trademarks."

“Importantly, the program directly addresses barriers to achieving success by influencing and motivating athletes to make the most of their careers both on and off the playing field, despite these very complex and uncertain times.

“Athletes will have a front seat in learning about the characteristics of a successful woman, hear their back stories, be inspired by their ability to overcome obstacles and be the best they can be,” Ms Palmer said.

The Victorian Chapter leads have already identified outstanding female business women based in Victoria who are willing and ready to join the Minerva Network and carry on extending the reach of the program in Victoria.

Minerva Network welcomes all elite women athletes to join the network, however given Victoria is one of the most populated states in the country, there will be a limited number of places available in the first Victorian cohort of the Minerva Network Mentoring Program.

The Victorian Chapter will be formally launched by webinar on 29th September.